Recently I finished reading “Take Joy“, a book about writing written for writers by writer, Jane Yolen.  One chapter was on using the landscape or place as a character in your story.  So I am going to try that out – using the place where I grew up as the main character.

Chesterland, Ohio, located in western Geauga County, was a sleepy farming community southeast of Cleveland.  Throughout much of the county, cows dotted the rolling hills, grazing contently on lush grasses watered by lake effect snows and rains.  Their milk minus what the farmer’s family needed, was sent to a creamery.

The old barn sat well back from the road.  “Plenty of room to expand,” Will mused.  “Perfect place for a new creamery.”  His dream!  And at 45 he was old enough and financially secure enough to indulge in a dream.  So Moss Farm Dairy was born. 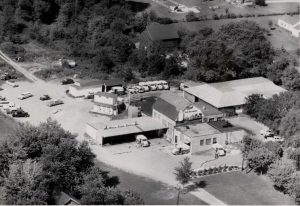 Moss Farm Dairy with many additions

As Chesterland changed from a farming community to a bedroom community with farmland being sold for housing tracts, Moss Farm Dairy changed too.  Additions were made to the old barn, but no matter how much it was changed the top of the barn remained, proudly displaying the large Moss Farm Dairy logo.

The road out front of the barn became busier as more and more people moved “out to the country,” but still worked in Cleveland and its suburbs.  By the time I was five it was a somewhat busy highway, still safe enough for me to cross when mom stood at the top of the hill watching.  Quarter held tight in my hand I looked both ways twice, ran across the road, past the gas pump and opened the door of the Tavern.  Inside Tinnny sold me the loaf of bread Mom had asked if she could buy.  Then I proudly carried it home.

By the time I was ten the change was more sweeping.  One summer night there was a loud explosion!  The underground gas tanks at the Tavern blew up.  Flames billowed into the air as Kitty gave birth to four kittens.  The one we kept was named Fire.

I was venturing further afield now.   Walking the mile to school and back – yes it was uphill both ways – using the back roads where it was safe.  I did have to cross both major highways, but they were only two lanes wide.  The back roads while well populated with houses were not paved.  Stones crunched under my sturdy saddle shoes as I walked up and down one hill and on to the next. 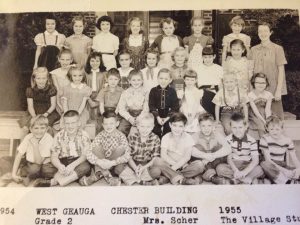 The school, built when Dad was young because the old wooden structure had burned down, was changing too.  Once a twelve year school, it now housed grades K-8 with a new modern wing added for the elementary students.  The grand staircase at the front entrance was no longer.  The office now occupied the space on the ground floor and the library on the second floor.  Only the third floor remained unchanged – the five classrooms with their wooden floors and clanging steam heaters exactly the same as they had been in the past.

Time moved on.  A plaza with a new modern grocery store and other smaller stores took up residence behind the Baptist Church.  A pizza palour and a couple small stores occupied one of the corners at the crossroads.  The gas station modernized.  More buildings showed the beginning of a “downtown” area.

The bowling alley where I’d attended kindergarten and the buildings surrounding it changed too.  The county library set up a branch in Chesterland.  The doctor moved his office out of his home.

Now luxury homes were being built in the wooded areas.  Pattersons expanded their apple orchards and added strawberry fields.  Moss Farm Dairy began winding down, merging with one of the Cleveland area dairies, and Dad went into semi-retirement.  I moved on.

Visiting as an adult I could see the changes more clearly.  The Tavern added a patio and outside dinning for summer evenings.  The funeral home was no longer a funeral home.  Tastee Freeze still offered cold treats in the summer.  The Moss Farm Dairy barn sat empty and forlorn.  The highway was busier than ever.

Four years ago I returned for my 50th high school reunion.

The old dairy buildings are still there.  They are now offices for various small businesses.  The Tavern has reverted to its original state minus the gas pumps.  Tastee Freeze is still there.  The house I grew up in is now a chiropractor’s office.

The rolling hills are dotted with homes.  The woods are no longer available for solitary walks.  The back roads are all paved.

And the corner about a mile out of town where a lone brick one room abandoned schoolhouse always stood has been transformed by the Chesterland Historical Society into a village by moving historical buildings to the site.

Posted in Our Stories