The Snail Wife and Me

I’ve been playing with Story!  As Kevin Cordi teaches in his book, “Playing with Stories,”  finding the best way, a new way, to tell a story is through play.  Thanks, Kevin, for helping me find another way to tell two stories at once!

My playing around with Story is the weaving of a folktale together with my own life story.  The result is included here.  I’ve kept the folktale format throughout.

One evening, on his way home from work Lonely Man saw a snail trying to cross the road.  But because many people and carts were on the road it was a dangerous place for a snail.  “Poor snail,” the Lonely Man said as he stooped and picked up the snail intending to place it in the ditch by the side of the road.

One evening at a fund raiser where he was working, Modern Day Lonely Man saw a woman in a red dress.  He asked, “Are you thirsty?”  It was his job that evening to serve water and lemonade.  “Yes!” she said.

Lonely Man looked down at the snail in his hand as he carefully crossed the road.  The shell could only be described as beautiful.  Slipping the snail into his pocket he thought, “I will keep this snail as a pet!”  Once home he made a special place for the snail in his garden with a tiny pagoda, a small pond and a mound of dirt to represent a mountain.  A peaceful place — good Feng Shui!  Every evening he carried his dinner outside to the miniature garden and told the snail tales of his day.

Modern Day Lonely Man engaged the Woman in Red in conversation, finding out as much about her as he could.  They danced and laughed and talked.  At the end of the evening, Modern Day Lonely Man asked, “Are you free to date?”  “No,” she replied, for she had left her second failed marriage just three weeks earlier.  She really didn’t want another relationship – ever!

One day Lonely Man came home to find a beautiful woman wandering in his garden.  Gently and with great wonder he asked, “Who are you?”  And she replied, “I am the snail you saved on the road.  My spirit has finally completed 1000 years and attained Qi; so I have chosen a human form.”  Lonely Man was overjoyed.  Now each evening he and the Snail Woman told each other tales of their days.

Instead of asking for her phone number, Modern Day Lonely Man told the Woman in Red, “My number is in the book.”  She never called.  Eight days later, he went to a different church than he usually attended.  A woman in old baggy clothes, big sun glasses and a hat pulled low held the door open for him as she entered the church.  Lonely Man spoke to some of the townspeople whom he knew.  Entering the sanctuary he saw the baggy woman without her sun glasses and hat and realized she was the Woman in Red.  “May I sit in your pew?”  “You may sit anywhere you like,” she answered.

Lonely Man and Snail Woman shared many wonderful conversations as they fell in love.  Happy Man built a new room on his small home for Snail Woman and then asked, “Will you marry me?”  “Yes,” she answered.

Modern Day Lonely Man engaged the Woman in Red in conversation during the Fellowship Time; then asked, “Would you like to join me on a trip to Fairplay for a Reiki Group?”   “No thank you,” she answered.

Another week passed.  Modern Day Lonely Man went back to the new church.  Woman in Red slid over in the pew when he appeared.  They were the last people to leave the church after Fellowship Time.

Happy Man and Snail Woman married.  They were very content together.  They often told each other tales of their lives and days.  Neither was ever lonely or sad again. 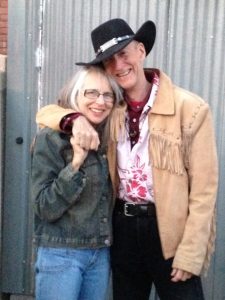 Modern Day Happy Man and Woman in Red saw each other more frequently. They told each other tales of their lives and days.  Eventually they became a couple.  And finally they committed to one another.  Neither was lonely or sad anymore.

I’d be interested in your perspectives or comments on this project.  Thanks!

Posted in Our Stories