Well, you can, but it’s not going to be the best story you’ve ever told.  Researching a personal story can be a fun and surprisingly interesting experience.

For years I refused to tell personal stories because I thought my life was uninteresting, you know, I’d bore people to death with my stories.  But the more I delve into personal stories, the more I find there are universal truths to our lives.  Truths that others may want or need to hear.

Back when I was employed as an elementary school librarian, we were putting on a literacy night for parents and students.  We were trying to show families how to communicate family stories from one generation to another.  I think we even had some grandparents in attendance.

Before the Literacy Night became a reality, we needed to set up the process we were going to follow to demonstrate how to go about eliciting family stories.  From other storytelling work I’d been doing, I had a list of good questions students could ask their parents and/or grandparents in order to start the process.

We decided that each of us who were putting on the Literacy Night would choose a question and develop a story about ourselves to go with it.  Then we gave the question to a student who would ask the question so we could answer it with our story.  I had not told personal stories before. 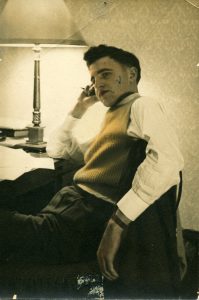 My dad in his gold sweater vest

Which question did I think would make my story interesting to this particular audience?  I searched the list.  And chose one I thought would work.

“What kind of clothes did you wear?  Did you have to wear things you didn’t like? Did you have a special outfit that you really liked?  What did it look like?”

This question made me think about the pictures of myself when I was young.  There wasn’t much in the pictures that was special.  But there was something in a picture of my dad – a sweater vest my grandmother knit for him when he was in high school.  That made me think about the sweaters she made for my sisters and me every Christmas.  That was it!  My Red Sweater – the last sweater my grandmother ever made for me.

Another story I tell is about the game of Monopoly.  My dad and I used to play this board game all the time when I was a kid.  Then I played it with my kids.  My son especially liked playing Monopoly.  We even played on the same board my dad and I used.

The story came about during the Story Slam at the Northlands Storytelling Conference in 2012.  I did not enter the Slam.  But while the judges were judging the stories, those in charge asked if anyone had a one minute story they could tell to entertain the audience while everyone waited for the results.  One of the contestants had just told a story about playing games with her family.  I thought, “I have a story like that!”  So I volunteered.

The story was more of an anecdote that first time, very few details, just the essence of playing Monopoly with my dad and a surprise ending that happened when my daughter went to the International Science and Engineering Fair in 1998.  After that night I added details, pulling more information from my brain and researching the strategies of playing Monopoly.

If the other people who are featured in a personal story are available, they can help flesh out the details, give a different perspective.  But mainly the research for a personal story is finding facts to support the universal truth within your story.  Finding facts that make the story “real” – what year was the Big Snow?  When were my parents married?  What date was Grandma’s birthday?  Finding information that fills in the blanks in the story.

I am now part of the elder generation in my family.  If I don’t pass on our Family History, it may be irretrievably lost.  I’ve done a lot of research in order to tell my father’s story.  Historical dates that impacted his life, who his parents were, where he lived, what was happening the year he was born?  All kinds of information that make his story fuller and more interesting.

So research for any story is important.  Research for personal stories can make your stories much more interesting, fuller and “real” to others.

Posted in Our Stories, Uncategorized